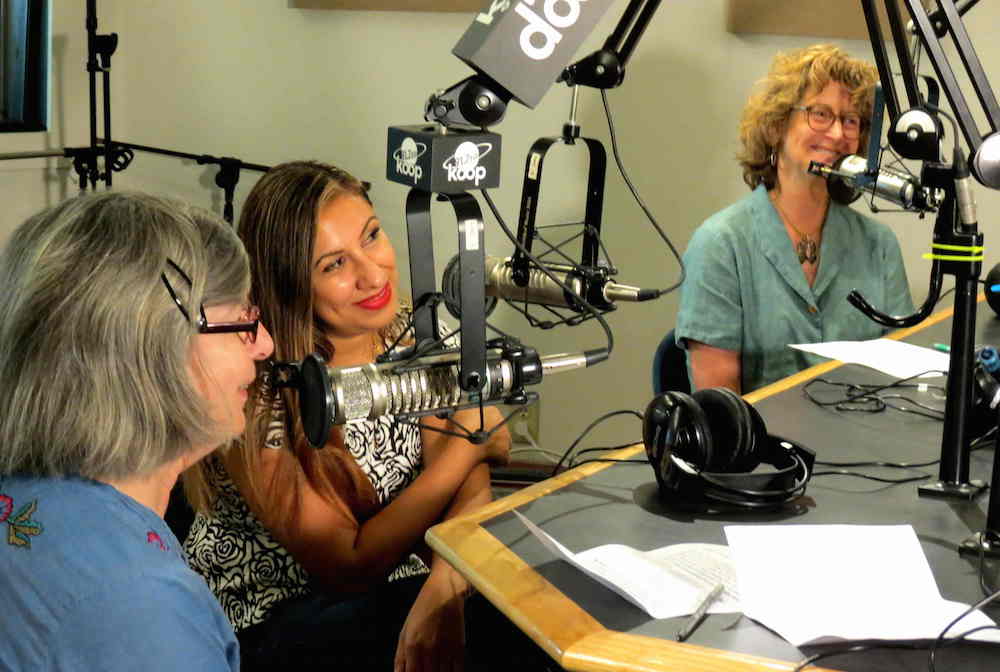 Guest Host Alice Embree interviews two women active in the struggle for immigrant justice, Claudia Muñoz of Grassroots Leadership and Peggy Morton of the Austin Sanctuary Network. They discuss the current challenges facing immigrants, including Trump's Zero Tolerance policy for asylum seekers and the cruel policy of separating children from parents. Both guests have worked with immigrants held in Texas' for-profit detention system and helped immigrants navigate the system after they are released from detention. Claudia Muñoz was born and raised in Monterrey, México, and has called Texas home since 2001. After her nephew was arrested in Williamson County and later put in deportation proceedings and sent to the South Texas Detention Center in Pearsall, Claudia began to organize with other undocumented youth nationwide to secure his release and demand dignity for all immigrants. Since graduating from Prairie View A&M University in 2009, Claudia has worked for various labor and immigrant rights organizations throughout the country. Claudia is undocumented and currently works at Grassroots Leadership as the Immigration Programs Director. Peggy Morton is a retired high school teacher of journalism and English as a Second Language, who has volunteered her time on behalf of immigrant rights since her retirement in 2009. She is part of the leadership team of the Austin Sanctuary Network, a coalition of 32 Austin area congregations and social justice organizations. She worked on the successful campaign for ICE prosecutorial discretion for Guatemalan Sulma Franco in 2015. Today she is working for the same result for three asylum seekers residing in sanctuary in Austin churches. El Salvadoran Alirio Gamez is at First Unitarian Universalist Church of Austin where Peggy is a member. A Guatemalan indigenous mother and her child, Hilda and Ivan Ramirez, are in sanctuary at St. Andrew's Presbyterian Church. Guest host Alice Embree is a longtime Austin peace and justice activist and union member. She worked with the original Rag in the '60s, writes for The Rag Blog, has been guest and co-host on Rag Radio, and is one of the editors of the acclaimed book, Celebrating The Rag: Austin's Iconic Underground Newspaper. A veteran of the Women's Liberation Movement, Alice was a contributor to the 1970 anthology, Sisterhood is Powerful. She is also a member of the Democratic Socialists of America (DSA). Photo above: Alice Embree, from left, Claudia Munoz, and Peggy Morton. Photo by Roger Baker / Rag Radio.
Rag Radio is produced in the studios of KOOP 91.7-FM, an all-volunteer, cooperatively-run, solar powered community radio station in Austin, Texas, in association with The Rag Blog and the New Journalism Project, a Texas 501(c)(3) nonprofit. It is streamed live on the Internet at KOOP.org and Radio Free America. The host and producer of Rag Radio, Thorne Dreyer, is a prominent Austin-based activist and writer who was a pioneer of the ’60s underground press movement. The show’s engineer and co-producer is Tracey Schulz and the staff photographer is Roger Baker; Suzy Shelor is Rag Radio associate; Alice Embree is guest host; and Glenn Smith is our political analyst. The syndicated show is broadcast (and streamed) live Fridays, 2-3 p.m. Central) on KOOP, and is later rebroadcast and streamed on WFTE-FM in Mt. Cobb and Scranton, PA., on Houston Pacifica's KPFT HD-3 90.1, by KKRN, 88.5-FM in Round Mountain, CA, and at WALHRadio.com in Wilmington, OH -- and as a featured podcast at Veterans Today. Learn more about Rag Radio here.